How to prioritize a chatbot scenario over another?

Firstly, create a blank scenario and give it a meaningful name, such as Priority Bot. This scenario will be used to create the template of your multiple pattern match scenario.Add a new Event Block directly under the entry gate and select the event type User Message Matches. Then in the message patterns, select Add a message pattern and lets add a placeholder such as: ENTER MESSAGE PATTERN HERE, you will change this later.Select Apply Changes once you are done, your event block should look like this: 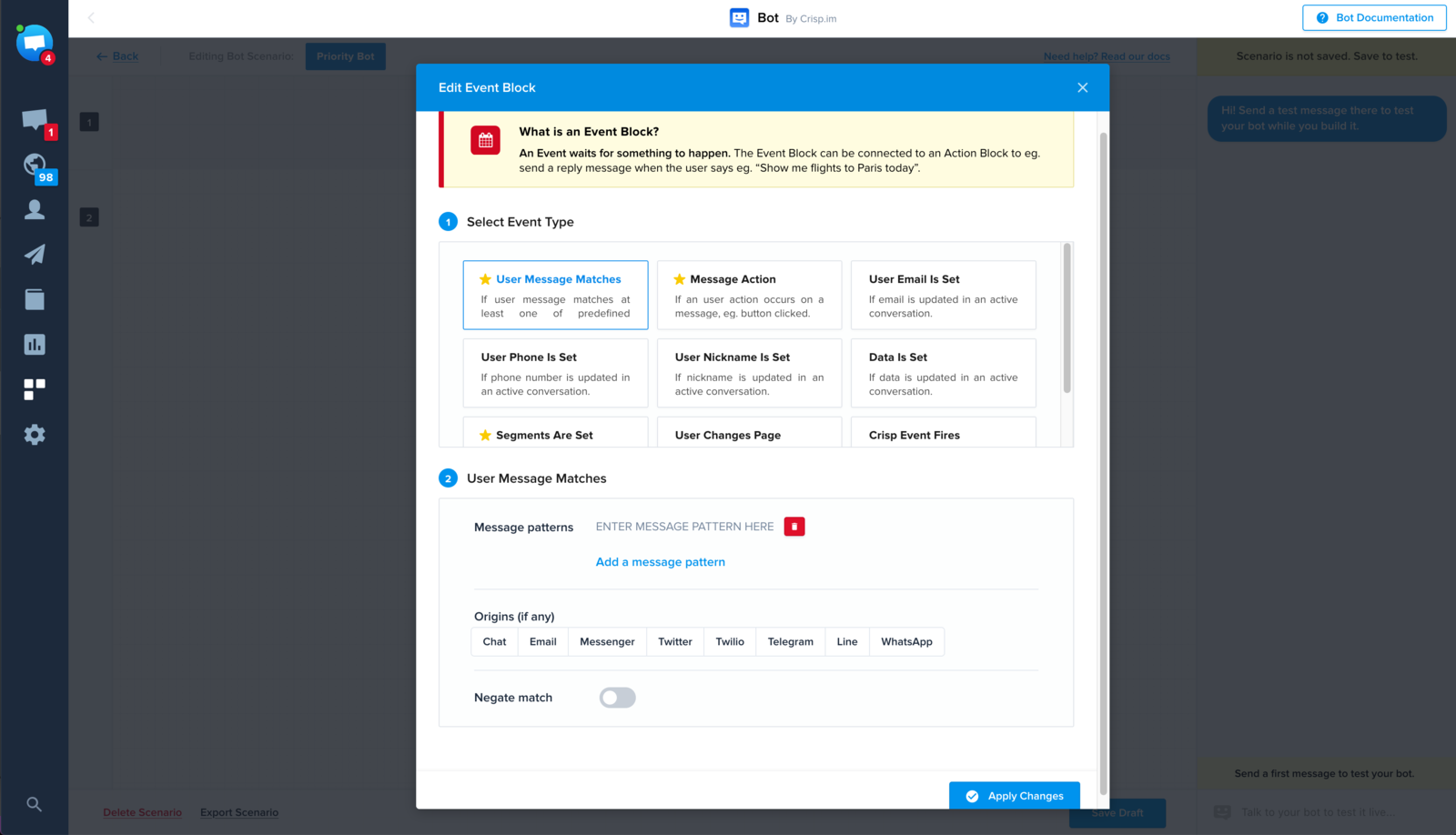 Add an Exit Scenario block and select Run Scenario. You will now need to select any existing scenario for the time-being, you will also change this later. It will look like this: 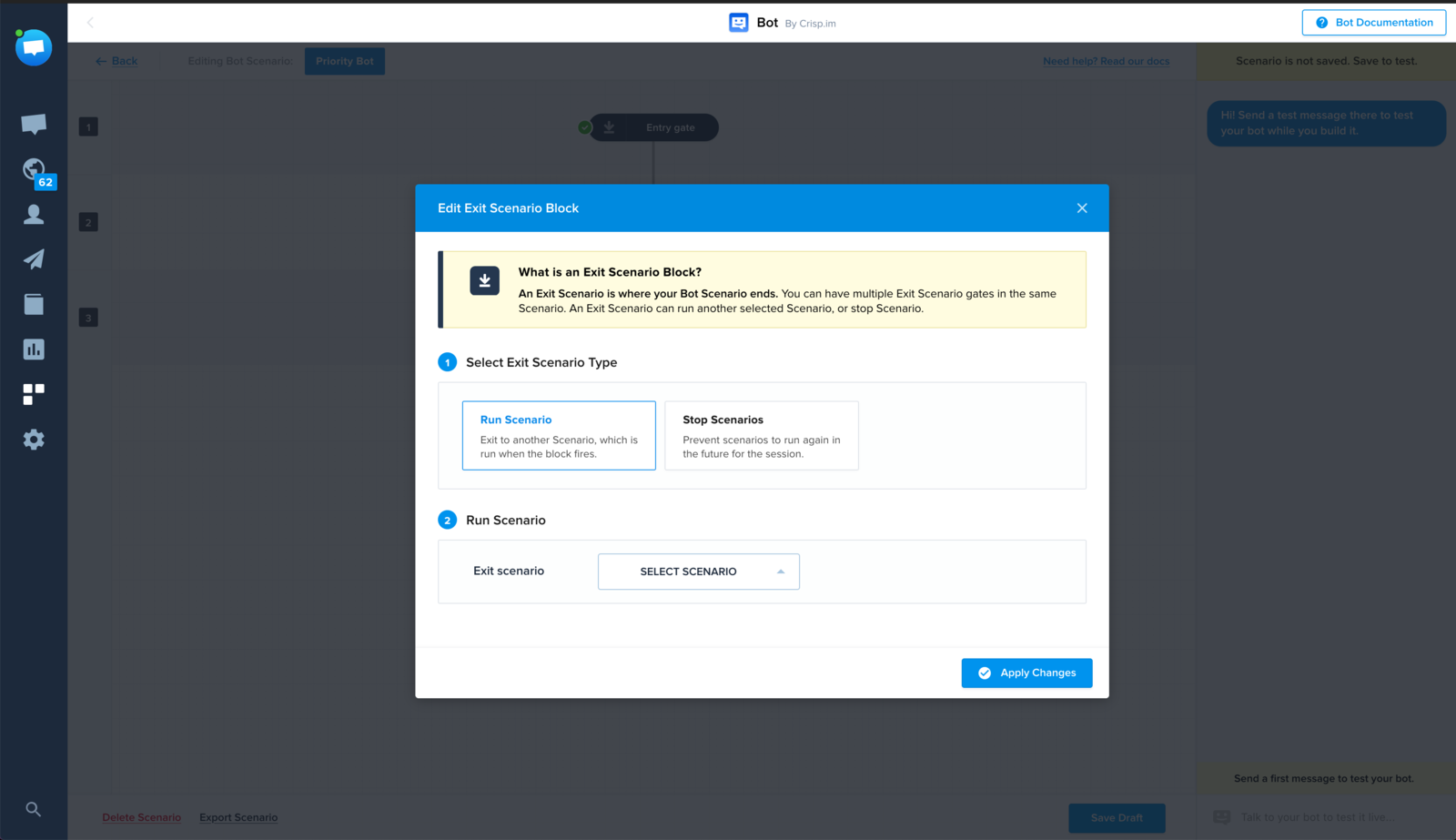 If you do not already have a second scenario created, create a new scenario and give it a name such as SELECT SCENARIO.Using exit scenarios is better, rather than adding all message blocks in one scenario, as this will help keep the scenario neat and easier to follow!

To create more pattern match event blocks, directly after the entry gate, you will need to edit the .json file. You will need a code editor to do this. Download the bot file, by clicking Export Scenario, found on the bottom left of the edit bot scenario page. Save the file to your computer and open it in your favourite code editor.Many code editors have extensions to make the .json files easier to read. For example, in Visual Studio Code there is an extension called 'Prettier - Code formatter'.

The next step is easy, all you will need to do is copy & paste existing code within the .json file. A JSON object consists of name/value pairs, where the value of a pair may also be another object. Furthermore, multiple objects used as a pair value, can also be placed inside an array, you will be duplicating and adding some of these objects in order to add new event blocks and run scenarios into your bot. Firstly, locate the "draft" value within the "flow" name. 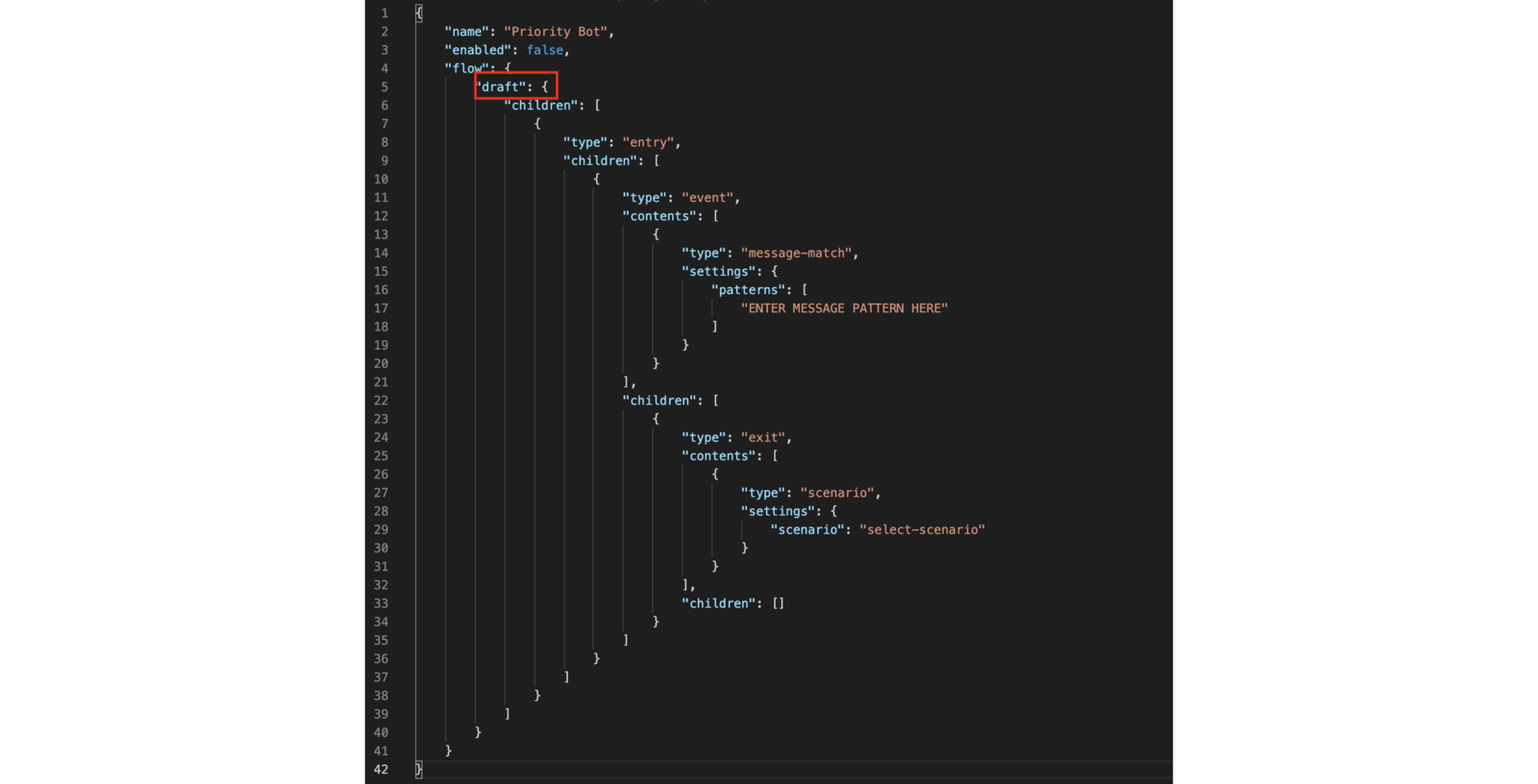 You might see a "live" value within the "flow" name if you had deployed your bot. Just be sure to make all changes within the "draft" value to ensure you see the changes in the Crisp Bot Plugin.Once you have located the "draft", you will need to highlight the code inside the "children" name, found underneath "type: entry" and copy it. Then you need to paste it directly underneath the last } from the text you copied. You will also need to add a comma after the last curly brace to look like this },. Save your file, your code should look like this: 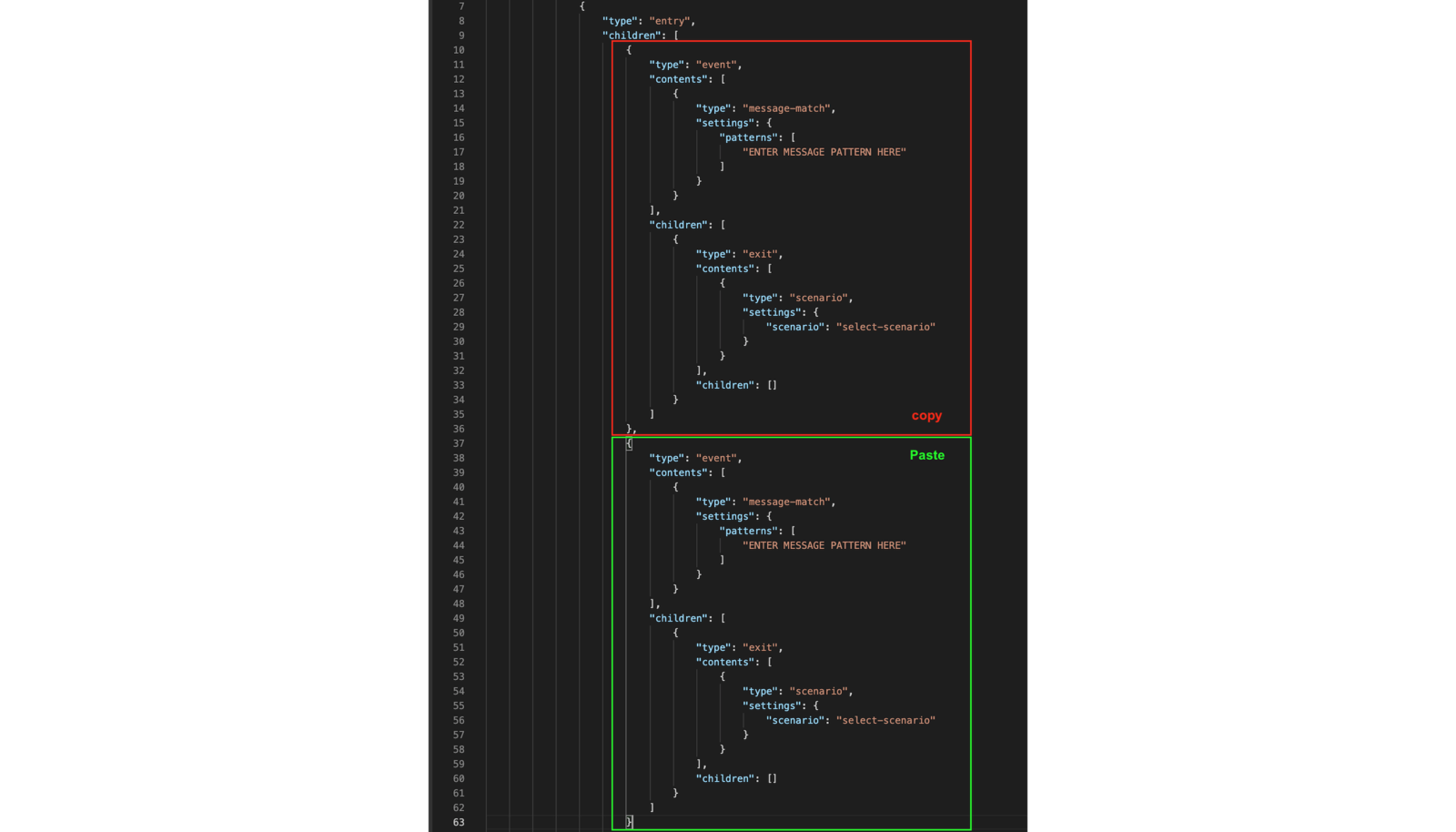 In the appendix of this article, you can copy the code and paste it in your .json file. It is the same code as the image above.

Once you have edited the .json file, open your bot plugin in Crisp and delete the existing "Priority Bot" that you created in step one. Then upload the new "Priority Bot" scenario you just edited:

If everything is ok, you will see a green banner at the bottom of your browser saying 'Success'. Open the scenario you have just imported, it should now look like this: 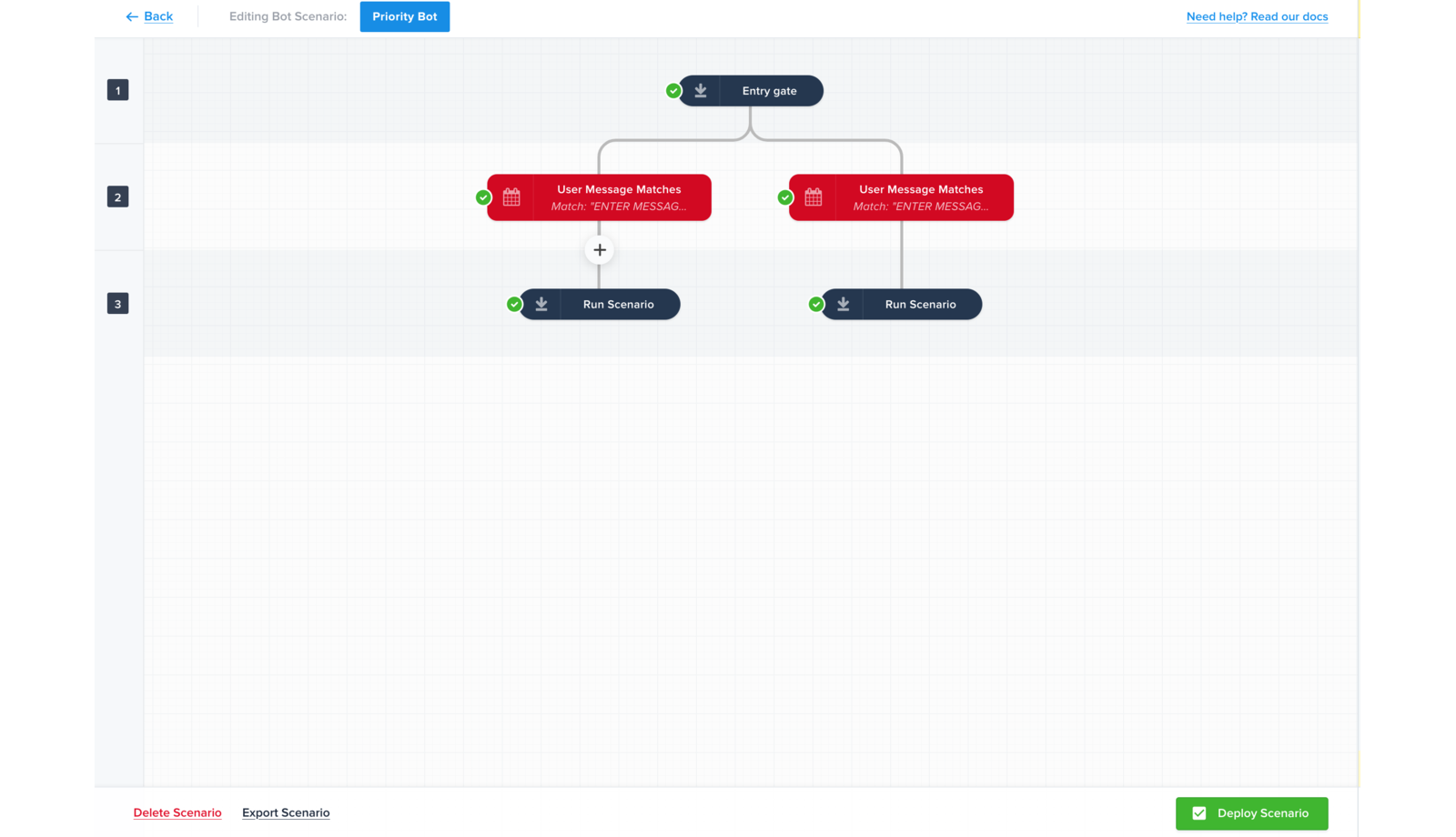